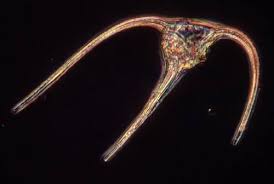 Dinoflagellates are large single-celled motile phytoplankton that are extremely widespread and abundant in the ocean. They are astonishing little creatures that – depending on the species – can produce potent neurotoxins, feast on organisms many times larger than themselves (whilst also photosynthesising), travel large distances in search of nutrients, hibernate for up to 100 years, and glow with terrific blue-coloured bioluminesence. So, without further ado, here are five reasons why dinoflagellates are friggin’ awesome:

Dinoflagellates are capable of producing a cocktail of deadly toxins, which is one reason why eating shellfish can be so precarious — shellfish poisoning is often caused by the accumulation of dinoflagellate toxins within shellfish, which can then be passed on to unsuspecting humans. It is thought that dinoflagellates produce these toxins in order to kill off rivals and potential predators (and possibly even as a means of locating a potential mate). This technique works rather well in some cases, causing huge blooms of dinoflagellates that can turn the surrounding water red (although other dinoflagellate bloom colours are available) – often with dramatic effect, such as in the recent case of a Noctiluca bloom in Australia (video below).

Worryingly, these toxic dinoflagellate blooms seem to be on the increase in many parts of the world, possibly from increasing nutrient loads in coastal waters.

Dinoflagellates can be greedy little buggers! Not content with obtaining energy from the sun, many also treat themselves to a tasty snack every once and a while (a phenomenon termed ‘mixotrophy’, as they ‘mix’ the nutritional life-styles of heterotrophy and phototrophy). Usually they chomp on small single celled organisms, but not always: one species has been found tackling  zooplankton much larger than itself (image below). Together with thousands of other cells, it attaches its feeding tube into its victim, and sucks out the juicy insides.

So why do dinoflagellates do this? It is often a way of obtaining carbon when there is not enough light for photosynthesis, but it can also be a way to obtain limiting nutrients (e.g. nitrate or phosphate), in a concentrated bite-sized package, when these nutrients are in short supply. The behaviour isn’t really too surprising when you consider the evolutionary history of phytoplankton: they evolved from a phagotrophic organism that ingested, and subsequently imprisoned, a chloroplast.  In fact, some dinoflagellates perform a very odd little trick that probably demonstrates an intermediate step in this evolutionary process:  they use chloroplasts that have been stolen from a prey organism — maintaining them in a functional state, and replacing them periodically.

Phytoplankton spend their lives trying to acquire sunlight and nutrients. These two things are typically separated vertically in the ocean, as nutrients are often rapidly used up in surface waters where light is plentiful. To cope with this many dinoflagellates will spend their days bathing in sunlight, before migrating to deeper waters at night to stock up on their beloved nutrients. Triggers for this behavior have been suggested to involve light, nutrients, and possibly the internal nutrient state of individual cells. This migration trick allows dinoflagellates to thrive in environments where many other phytoplankton perish.

Despite all these adaptations, sometimes life just gets too tough for poor dinoflagellates. When this happens they opt to hide away, and wait for favourable environmental conditions to return. They do this by forming resilient cysts, that can accumulate in the sediment and remain viable for up to 100 years. In this way cysts act as reservoirs of genetic diversity, increasing the survival potential of populations — think of cysts in the sediment as a genetic ‘library’ of dinoflagellates, so that regardless of the prevailing environmental conditions there is probably a dinoflagellate genotype present in the sediment that can take advantage.

When disturbed, some dinoflagellates emit bright blue light — referred to as bioluminescence. When under high concentrations, the effects of this can be breathtaking (video below)! The reasons for this behaviour aren’t really known, but the best theory is that it is a way of avoiding predation from other organisms: either by confusing the predator (much the same way that octopuses produce ink), or by acting as a burglar alarm and attracting other organisms to the area which may eat the dinoflagellate’s attacker.

If you are interested in the ocean, you will enjoy reading our book, “Do Fish Sleep?: and 38 other ocean mysteries”. It is available to buy on kindle here for the reduced  price of $1.46 (99p) until the end of January.

3 thoughts on “5 reasons why dinoflagellates are friggin’ awesome:”