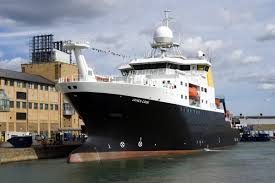 In an opening speech that, thankfully, did not contain one utterance of the hateful phrase ‘going forward’ (I was poised ready to count them), Professor Ed Hill (director of the National Oceanography Centre, Southampton) talked about future challenges for funding UK oceanography: this talk, from the outset, felt like it was going to be depressing!

The talk started with some facts and figures. The Natural Environment Research Council (NERC) – responsible for funding the majority of UK oceanography, in a addition to other Earth sciences – currently spends £300 million a year on science (or, as I prefer to think of it, nearly 13 Bob Diamonds). However, due to a recent 3 % cut, NERC has £11 million less to spend on science. When you take into account the inflation (rising fuel costs etc.) on running large research infrastructure (ships etc.), which cost about £50 million a year, it turns out that NERC has about £18 million less to spend on science each year. Ed Hill said that by the time of the next spending review there will be £40 million less to spend each year.

So how does NERC propose to address this? Ideally, they would like to increase their budget (probably unlikely with this government at the helm – my words not his). Or, and here is the worrying bit, NERC could reduce the cost of its ships: either chartering them out (oil exploration companies were mentioned… depressing!), or by developing funding proposals with industry (also depressing, also probably involving oil companies). If nothing else works Ed Hill says NERC may need to look into selling its ‘large infrastructure’.

At this point, the audience was asked for their opinion on these issues – particularly whether we still need as much ship-time now that we have gliders, Argo floats etc. – and in a display of typical British politeness most audience members kept quiet. One UK PhD student expressed concerns over industry pressures on research that may result from increased industry funding. Intriguingly, the two people most (vocally) opposed to reduced ship-time were academics from American universities (Jim Bishop from UC Berkeley and Chris Measures from the University of Hawaii), both of whom made valid points: Jim Bishop made the point that it typically takes over 10 years for sensors to go from development onto floats, and that there are many things that (even with the next generation of sensors) can only be achieved onboard research ships. He also pointed out that ship-work helps feed back into the public perception of our science, inspiring the next generation of oceanographers. Chris Measures made the point that new technologies (aka autonomous sampling devices) actually increase the need for ships (via deployment, monitoring, servicing and ground truthing of autonomous instruments etc.).

Myself and other colleagues (especially those towards the beginning of their career) were somewhat surprised by the lack of outrage from UK oceanographers about what was being proposed here, so I will finish this post by quoting this inspiring rallying call by Chris Measures:

“In the US we are used to fighting for things. You need to fight/lobby to keep your research ships; because if you don’t, they WILL take them from you!”